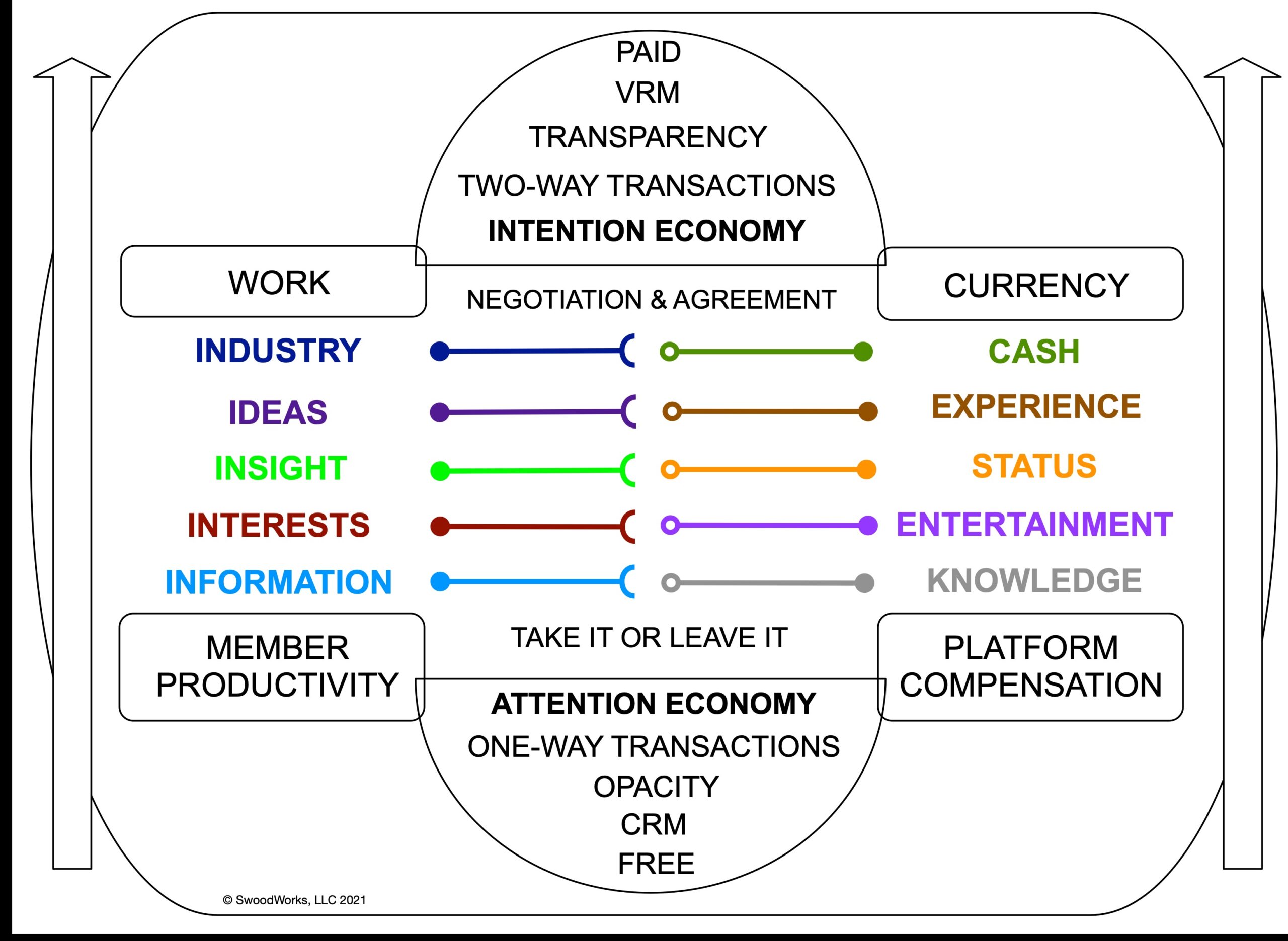 Facebook, LinkedIn, Twitter … they all revel in being FREE platforms for connecting and sharing. Of course, the price of FREE is advertising, which has become the default monetization model for the bulk of what we call The Internet. There is an as yet unexplored alternative.

This unexplored alternative might serve not only fulfillment of the world Mr. Zuckerberg “wants” and an opportunity for each of us to act on Mr. Hoffman’s encouragement to be “entrepreneurial;” it might also serve as an economic engine that benefits both their businesses and the livelihoods of their members.

Traditional journalism sources (NYT, WSJ, etc.) have a mix of ad-supported and subscription revenue streams. New media journalism, ala Huffington Post, Buzzfeed, Business Insider, all of which expose viewers to a virtual tsunami of advertising; some legit, possibly relevant to you, but most just short of voyeuristic clickbait.

Who among us isn’t exhausted by the advertising overload?

“Free” is a topic of constant debate and much is written on the matter:

Whew. Ads’R Us = The FREE Internet.

True, LinkedIn offers a premium level, which generates 20% of revenue. But even premium exposes one to advertising .. that generates 35%. LinkedIn’s job search offering generates 55%, which certainly resonates with its status as a platform designed to connect professionals. (Data from a Quora contributor: Roman Cottard.)

What if LinkedIn (naturally) and Facebook and even other social platforms were to become massive platforms for the distribution of work … balancing the rewards for makers and takers? It’s actually surprising that no platform has yet to adopt the revenue model staring them in the … face.

Facebook – could set up Workbook. The platform represents an unparalleled storehouse of information regarding the behavior, interests and perhaps even expertise of nearly 2 Billion human beings, just shy of 1/3 of Earth’s population! Exclamation point deserved.

Of course, not every type of work is suitable for such a model. But many kinds could be. An increasing number of work-based platforms are emerging — WITHOUT having at their disposal the primed, parsed, personalized, filterable pool of talent/skill/shared interest that existing platforms already host. (Jeremiah Owyang will give you a tidy catalog of crowd models in his Collaborative Economy honeycomb graphic here.)

At present, social networks are largely one-way transactional systems (cf. Jaron Lanier) where users generate/share freely (meaning both without personal restraint and without recompense) information about their behaviors, their activities, their interests. Reciprocity is out of balance in these transactions.

Per economists … these one-way models may be seen as “rent-seeking.” While they begin in service of a member/customer, finally they serve primarily themselves. To quote Angus Deaton, (Freakonomics interview, 04/12/2017) “a lot of the people really rich are rich because of rent-seeking, not because of stuff they invented [anything]. Of course, it’s complicated because the inventors turn into rent-seekers very quickly if you don’t watch out.” The inventors of these social networks are inventors who turned rent-seeker. Their vast wealth comes not from their invention, but from the advertising that piggy backs the connecting technologies, at the expense of the captive user … as in Zuckerberg, Reid, Dorsey, Page, Brin …

WORK distribution could remedy this situation. It could provide a choice – with built-in compensation – for the consumer/member and add another revenue stream to the platform AND to its members.

Ryan Calo and Alex Rosenblat, recently published a paper on The Taking Economy. Their paper is primarily directed at the Uber/Lyft/Airbnb side of the “sharing” economy. But the “taking” notion is fitting for nearly all businesses who count on people sharing idle capacities in time, talent, skill, etc.

They do address the “free/ad” scenario: “But even one of the most common business models of Internet firms—free content in exchange for ads tailored to one’s interest—is mutating. Increasingly, firms use what they know about consumers not only to match them to content they might prefer, but to nudge consumers to pay more, to work for less, and to behave in other ways that advantage the firm.” (pg 24)

Taking. Taking advantage of the provider in some way. These platforms can be designed to operate in ways that give an advantage without also taking advantage. They could be models of the reciprocal, exchange based economy that defines the human enterprise. MAKERS = TAKERS in a sustainable economy.

Doc Searls has invested a great deal of thought and effort into defining the Intention Economy, that strives to balance out the equation. If anything, he would push the asymmetry in favor of the consumer, with VRM, Vendor Relation Management, rather than CRM.

And if you question the asymmetrical power of advertising, consider Tim Wu‘s book The Attention Merchants. Check out his Fresh Air podcast and you’ll want to rail against the free-doms you’ve earned via clickbait.

(We knew The Beatles were songwriters, musicians, and pop icons. But who knew they were economists!)

convert the sharing economy into the doing economy — where taking and making Thrive in balanced exchanges.

Again: these platforms already exist! Facebook. LinkedIn. Twitter. They’re the “siren servers” (see Jaron Lanier) that have more information about you than you have about them. Frankly, it’s more information than they know what to do with.

What if they could DO something with YOUR information? What if they were to actually activate it on your behalf, even if also on their behalf?

They just need a little software (which will eat the world at some point, right?). Social networks could become trusted marketplaces where two-way transactions become vibrant, symmetry becomes standard, reciprocity and trust become the norm. Exchange and Trust; two-way modalities. A new world of work.

These days, we hear about all kinds of economies: sharing, gig, on-demand, knowledge, collaborative, taking, attention, intention … You name it. Let’s just have the Economy of Doing, which is finally what all economies are meant to be: doing one thing in exchange for another thing, openly and agreeably.

Without presuming to be an economist (any more than Lennon/McCartney) this premise of “exchange” is a fundamental force in defining what it means to be human and frankly to be civilized. This perspective is shaped by the likes of Matt Ridley in The Rational Optimist: How Prosperity Evolves, check out this EconTalk podcast, and by Smith’s biographer, Nicholas Phillipson, Adam Smith: An Enlightened Life, also in an EconTalk podcast.

Borrowing even more from Mr. Ridley, perhaps this notion of turning sharing networks into doing networks can become a rationally optimistic goal.

This site uses Akismet to reduce spam. Learn how your comment data is processed.